TRA is a defined-benefit (“DB”) pension plan that’s more similar to Social Security than to a 401(k) or 403(b) defined-contribution (“DC”) plan.

During your career, you and your employer make mandatory payroll contributions to TRA. The funds are pooled and managed by the State Board of Investment to pay your eventual benefit.

What is a pension?

Here are the key differences between your TRA pension and other savings: 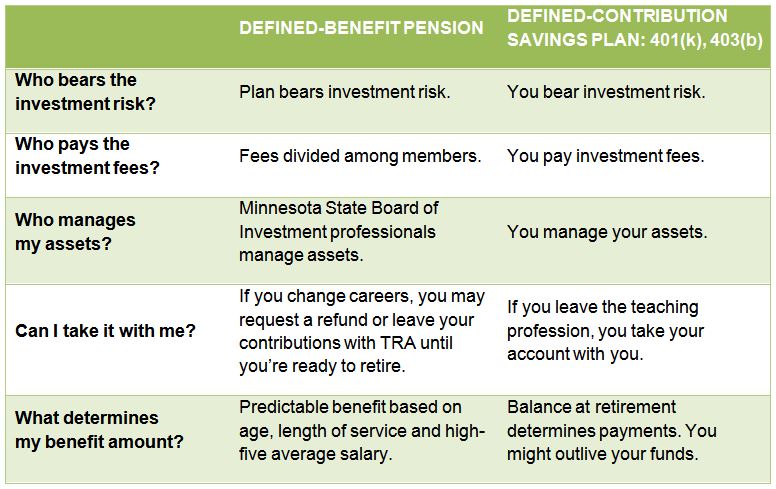 TRA is not affiliated with, nor do we endorse, any commercial companies selling retirement savings products.

Occasionally, financial planning companies will use “TRA” in their advertising or presentation materials or otherwise imply that they represent TRA or can provide you with your personal TRA retirement information. However, if you receive any solicitations from third parties that appear to indicate that they have a connection with us, beware.

If you ever receive a solicitation from a company offering to sell you financial services and claiming to have a connection with TRA or have access to your personal TRA data, first, be cautious. Second, call us at 800-657-3669.

Here’s how we translate the statistics of your career into retirement income later.

Most TRA members are “vested” in the TRA plan after three years of service. If your last service was before 1989, your vesting requirement might be five or 10 years. If you have service with another Minnesota pension fund or funds, a combined five years may be required based on the other funds’ vesting requirements.

Once you’re vested, you have earned enough service credit to be eligible for TRA benefits such as leaves of absence and disability.

Service credit affects eligibility for benefits as well as benefit amount. Paid sick leave, vacation days and all required attendance days and hours (such as workshops) count toward service credit. TRA allows no more than one year of service during any fiscal year. Service credit for part-time teachers, extracurricular pay, retro pay, and summer pay is prorated.

During your teaching years, a percentage is deducted from every paycheck for your retirement. The current employee contribution rate is 7.5 percent. Your TRA contributions are pretax, reducing your taxable income. Your TRA paycheck deductions are determined by Minnesota law and are subject to change.

Tier I and Tier II formulas

If you were employed before July 1, 1989, and earned service credit, your retirement benefit will be calculated under both Tier I and Tier II formulas. At retirement you automatically receive the greater of these two benefits.

If you were first employed after June 30, 1989, your retirement benefit will be calculated under Tier II only.

All this information is available in our brochure Pension basics for new teachers.

TRA’s role in your financial future

A secure retirement has four components: Social Security, a defined-benefit pension like TRA, personal savings or a 401(k)/403(b), and medical savings (in addition to your health insurance). If any of those pieces is missing, you might not have enough income to support yourself. Less than half (49 percent) of private-sector workers have retirement savings. The average 401(k) balance for households near retirement is only about $150,000. 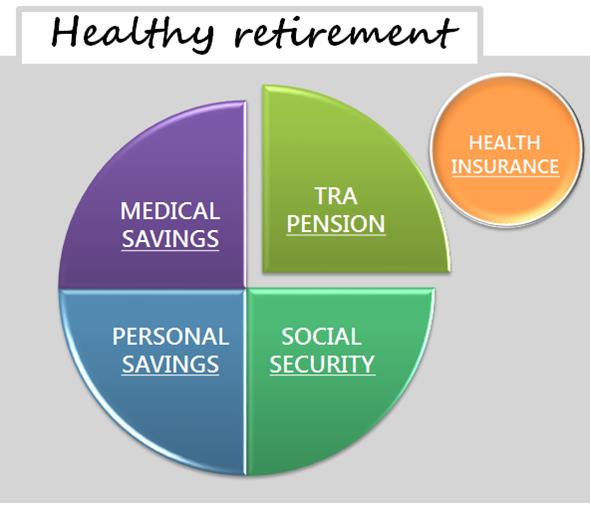 (by year of birth)

All about early retirement

You might be considering retiring early. If you do, your benefit must be reduced because you will be receiving it for a longer period of time.

“Early retirement” is any age earlier than 66, and the younger you retire before age 66, the higher the reduction — similar to Social Security.